Objective: To become more knowledgeable with the hydraulic system. Flow control valve is controlling the rate of flow in a hydraulic circuit; it’s possible to control the speed of hydraulic cylinder. A cylinder is speed is determined by its size and the flow rate of the oil going to or out of it. A large diameter cylinder would hold more oil and take longer to complete its stroke; a smaller the cylinder would move faster. Changing the flow rate from the pump would also change the extension time of the cylinder.

Metering out has the advantage of maintaining back pressure on the lower pressure side of the cylinder.  This prevents sudden extension or retraction of the cylinder if the load reverses. 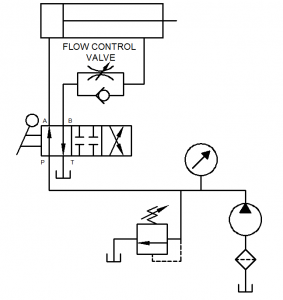 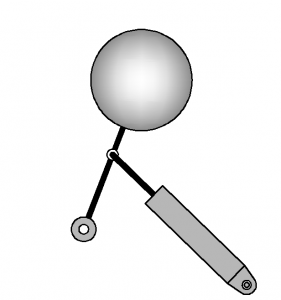 The meter-out circuit can be very accurate, but are not efficient. The meter-out circuit can control overrunning as well as opposing loads while the other one method must be used with opposing loads only. The choice of flown control valve method and the location of the flow control in the circuit are dependent on the type of application being controlled.