There is no doubt that technology has earned its place in the machine shop.   All but the smallest machine shops use CNC (Computer Numerical Control) equipment.   CNC equipment is used to make components and tooling for almost every industry imaginable.   From aerospace to agriculture, CNC machines are busy supplying an ever-increasing demand for high-quality, precision-made parts.

The success of CNC equipment may mean different things for people working where CNC is becoming more common.  Even a highly skilled machinist who does not take the effort to adapt to this changing environment may soon find his or her function in the shop being limited to that of an operator.  Alternatively, the operator who begins to learn and understand something about the seemingly incomprehensible code that streams through the CNC controller is on his way toward a more rewarding career as a programmer of machine tools.  Keep in mind that the technology will change.  Whether or not you go along for the ride it is up to you.

Your Safety is IMPORTANT!

CNC machines are powerful.  They do not ask questions before they act.  You are responsible for your safety at all times.  Be sure to read completely and understand the operating instructions for the machine you are using.  Many people are killed and maimed by industrial equipment every year.   Know the hazards associated with your equipment and RESPECT the power of a machine tool. (see ANSI B11 series standards, maintained by AMT)

While CNC may seem like a complicated way of doing things, it is really a system of a few relatively simple concepts.  Being able to understand each of these concepts individually is how a programmer will become a master of the technology.

In its most simplified explanation, CNC takes a series of numbers, sorts them out, and converts them into electrical signals that move motors.  The series of numbers comes from a program.  Humans are able to read a program because it is made up of letters, numbers, and symbols that we are familiar with.  Machines are able to read a program because it is stored digitally in binary form.  That is, each of the letters, numbers, and symbols are made up of ones and zeros.  When the machine “sees” a series of ones and zeros that fit a particular pattern, it initiates a pre-determined sequence of actions.

For example, if a programmer wants to move in a straight line, they will enter “G01” followed by a series of X, Y and/or Z coordinates.  The machine recognizes the G01 command and moves to the coordinates specified.

Most machines have some sort of feedback so they can measure whether or not the table has moved the specified distance.  This is known as a closed loop system.  If there is no feedback, the system is open loop.

Every machine tool is different.  Even machine tools with exactly the same model number can be configured to behave differently.  However, each machine has some common elements that perform the same function.  The components that are common across the board are: the controller, motors, and motion control.  Of course CNC machines also have most of the components of their manually-operated counterparts, however, most CNC machines must be built with more rigidity and more precision than the non-automated versions.

The controller of a CNC machine is the “brain” of the machine.  All commands and information required to run the program.  In today’s machines, a computer is an integral part of the controller.  Older machines which were only Numerical Control (NC) machines

A CNC controller consists of an interface (RS-232, USB, Floppy Disk, etc.) by which a program can be uploaded, a central processing unit (or CPU) which is the actual “computer” in CNC.  The control system also include a motor driver that converts the low voltage output of the CPU to the line voltage used to drive the motors.  This driver may be located in the same cabinet as the CPU or, more typically, in another cabinet adjacent to the machine.

The next major component common to all CNC equipment is the motor.  The function of a motor should be obvious – they are the sources of motion for the machine.  The job of the motor is to convert a particular amount of electrical energy into just the right amount of mechanical energy.  Motors can only do this function properly if they are they are of sufficient capacity to do a particular amount of work in a certain amount of time.  Motors are rated in units of “power.”  Power is work per unit time and takes the units “Watts” (metric) or “horsepower” (U.S. customary).

There are two main types of motors used in CNC equipment: Stepper motors and servo motors.  The difference between these two is related to how they interact with the controller.

Servo Motors can be AC or DC. 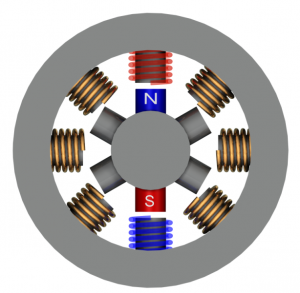 Smaller, low cost CNC machines sometimes use stepper motorsto drive the axes of motion.  A stepper motor moves some fraction of an arc (a “step”) for each pulse of electricity it receives from a controller.  Unlike servo motors, stepper motors have no feedback in their control system.  Instead, they rely on a kind of dead reckoning. When a stepper motors receive a number of pulses, and the controller must assume the motor actually moved that number of steps.  The primary advantage of stepper motors is the fact that they are much less expensive than servo motors.  Stepper motors are available that have a high degree of precision; however, the lack of a feedback loop prohibits their use in most production CNC equipment.

Other types of motors include linear motors and hydraulic motors.  Linear motors “unwrap” a traditional servo or stepper motor into a straight line.  The resulting motion from the magnetic fields generated is linear instead of rotary.  As these types of motors

Hydraulic motors are reserved for use on the most power-intensive applications.  They harness the energy put into a hydraulic circuit by a hydraulic pump.

An important concept in CNC and other equipment is that of backlash.  Backlash is the “slop” that occurs when the direction of travel of an axis reverses.  If a system has a lot of backlash, there will be a period of time when the motor is running but there is not corresponding motion of the axis.  One special type of leadscrew designed to eliminate backlash is the ballscrew.  A ballscrew uses balls rolling between the leadscrew and the nut to which it is transmitting power to eliminate backlash without increasing friction.

There seems to be no end to the accessories and other equipment that is used to support CNC machines.  Some of the most common are outlines here.  Bar feeders are used with CNC lathes to continuously supply the machine with work material.  Tool changers are available on most machines to automatically switch tools to perform an extended variety  of operations.   Some machines are able to make evaluation of the products they are producing.  In-process gaging actually measures a workpiece as it is being made, and can adjust a cutting operation to compensate for variation due to tool wear, changes in temperature or humidity and other factors.  Pallet changers allow a machine to be set up while it is running.  A pallet is a precisely positioned work-holding device that can be mounted accurately and repeatably placed in the machine.  Another accessory that can be highly beneficial to a high-production environment is high-pressure through the tool coolant.  This allows pressure to be pumped through the actual cutting tool to flush out chips as they are formed. 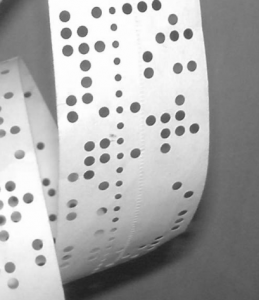 CNC Punch Tape On punch tape, the value of each bit (a one or zero value) was signified by the presence or absence of a hole. (ManufacturingET.org)

Understanding the history of CNC equipment is more than interesting reading.  Since it represents a significant investment, a lot of older CNC equipment is still being used in facilities around the world.  Additionally, understanding how these machines have evolved gives the programmer some insight into why certain codes and operation are structured the way they are.

While CNC may seem like a new technology, it has actually been around longer than most people realize.  In 19_- the first numerically controlled machine tool became operational.  This machine had a controller

At this time, computers were so expensive only companies with a lot of capital had CNC equipment.

Punch Tape each hole was a 1…