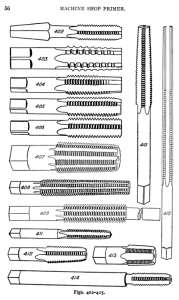 Taps and dies are cutting tools used to create screw threads, which is called threading. A tap is used to cut the female portion of the mating pair (e.g., a nut). A die is used to cut the male portion of the mating pair (e.g., a screw). The process of cutting threads using a tap is called tapping, whereas the process using a die is called threading. Both tools can be used to clean up a thread, which is commonly referred to as “chasing.”  Note, however,  that the term chasing correctly refers to a mass-production method of producing threads using segmented tap and die heads.

While modern nuts and bolts are routinely made of metal, this was not the case in earlier ages, when woodworking tools were employed to fashion very large wooden bolts and nuts for use in winches, windmills, watermills, and flour mills of the Middle Ages; the ease of cutting and replacing wooden parts was balanced by the need to resist large amounts of torque, and bear up against ever heavier loads of weight. As the loads grew ever heavier, bigger and stronger bolts were needed to resist breakage. Some nuts and bolts were measured by the foot or yard. This development eventually led to a complete replacement of wood parts with metal parts of an identical measure. When a wooden part broke, it usually snapped, ripped, or tore. The splinters having been sanded off, the remaining parts were encased in a makeshift mold of clay, and molten metal poured into the mold, so that an identical replacement could be made on the spot.

Metalworking taps and dies were often made by their users during the 18th and 19th centuries (especially if the user was skilled in toolmaking), using such tools as lathes and files for the shaping, and the smithy for hardening and tempering. Thus builders of, for example, locomotives, firearms, or textile machinery were likely to make their own taps and dies. During the 19th century the machining industries evolved greatly, and the practice of buying taps and dies from suppliers specializing in them gradually supplanted most such in-house work. Joseph Clement was one such early vendor of taps and dies, starting in 1828.[1] With the introduction of more advanced milling practice in the 1860s and 1870s, tasks such as cutting a tap’s flutes with a hand file became a thing of the past. In the early 20th century, thread-grinding practice went through significant evolution, further advancing the state of the art (and applied science) of cutting screw threads, including those of taps and dies.

During the 19th and 20th centuries, thread standardization was evolving simultaneously with the techniques of thread generation, including taps and dies.

The largest tap and die company to exist in the United States was Greenfield Tap & Die (GTD) of Greenfield, Massachusetts. GTD was so irreplaceably vital to the Allied war effort from 1940-1945 that anti-aircraft guns were placed around its campus in anticipation of possible Axis air attack. The GTD brand is now a part of Widia Products Group.

Bottoming, plug and taper taps, from top to bottom, respectively. A tap and “T” wrench

A tap cuts a thread on the inside surface of a hole, creating a female surface which functions like a nut. The three taps in the image illustrate the basic types commonly used by most machinists:

The above illustrated taps are generally referred to as hand taps, since they are, by design, intended to be manually operated. During operation, it is necessary with a hand tap to periodically reverse rotation to break the chip formed during the cutting process, thus preventing an effect called “crowding” that may cause breakage. Periodic reversing is usually not practical when power tapping is involved, and thus has led to the development of taps suitable for continuous rotation in the cutting direction.

The most common type of power driven tap is the “spiral point” plug tap (also referred to as a “gun tap”), whose cutting edges are angularly displaced relative to the tap centerline. This feature causes the tap to continuously break the chip and eject it into the flutes, preventing crowding. Another version of the spiral point plug tap is the spiral flute tap, whose flutes resemble those of a twist drill. Spiral flute taps are widely used in high speed, automatic tapping operations due to their ability to work well in blind holes.

Whether manual or automatic, the processing of tapping begins with forming and slightly countersinking a hole (usually by drilling) with a diameter somewhat smaller than the tap’s diameter. The correct hole diameter may be determined by consulting a drill and tap size chart, a standard reference item found in many machine shops. If the hole is to be drilled, the proper diameter is called the tap drill size.

In lieu of a tap drill chart, it is possible with inch sized taps to compute the correct tap drill diameter as follows:

The correct tap drill diameter for metric sized taps is computed as:

With soft or average hardness materials, such as plastic, aluminum or mild steel, the common practice is to use a intermediate (plug) tap to cut the threads. If the threads are to extend to the bottom of a blind hole, the intermediate (plug) tap will be used to cut threads until the point of the tap reaches bottom, after which a bottoming tap will be used to finish the hole. Frequent ejection of the chips must be made in such an operation to avoid jamming and possibly breaking the tap. With hard materials, the machinist may start with a taper tap, whose less severe diameter transition reduces the amount of torque required to cut the threads. If threads are to be cut to the bottom of a blind hole, the taper tap will be followed by an intermediate (plug) tap and then a bottoming tap to finish the operation.

Tapping may either be achieved by hand tapping by using a set of taps first tap, second tap & final (finish) tap or using a machine to do the tapping, such as a lathe, radial drilling machine, bench type drill machine, pillar type drill machine, vertical milling machines, HMCs, VMCs. Machine tapping is faster, and generally more accurate because human error is eliminated. Final tapping is achieved with single tap.

Although in general machine tapping is more accurate, tapping operations have traditionally been very tricky to execute due to frequent tap breakage and inconsistent quality of tapping.

Research has shown[citation needed] that the important reasons causing tap breakage are as follows:

Various tool holders may be used for tapping depending on the requirements of the user:

The biggest problem with simple hand-tapping is accurately aligning the tap with the hole so that they are coaxial—in other words, going in straight instead of on an angle. The operator must get this alignment rather close to ideal in order to (a) produce good threads and (b) avoid tap breakage. The deeper the depth of thread, the more pronounced the effect of the angular error becomes. With a depth of 1 or 2 diameters, it matters little. With depths beyond 2 diameters, the error becomes too pronounced to ignore. Another fact about this alignment task is that the first thread or two that is cut establishes the direction that the rest of the threads will follow. In other words, you can’t make corrections to the angle once you have cut the first thread or two.

To help with this alignment task, several kinds of jigs and fixtures can be used to provide the correct geometry (i.e., accurate coaxiality with the hole) without having to use freehand skill to approximate it:

Generally the following features are required of tapping holders: The die cuts a thread on a preformed cylindrical rod, which creates a male threaded piece which functions like a bolt. The dies shown are

A cylindrical blank, which is usually slightly less than the required diameter, is machined with a taper (chamfer) at the threaded end. This chamfer allows the die to ease onto the blank before it cuts a sufficient thread to pull itself along.[8]

The adjusting screws allow the die to be compressed or expanded to accommodate slight variations in size, due to material, manufacture, or die sharpness.

Each tool is used independently, but are usually sold in paired sets of both types, one die and three taps. Some sets may provide a lesser number of taps. The common sets shown are designed for hand operation, but different types such as helical or spiral may be used in production tools such as CNC machining tools, which employ die heads to make large volumes of threaded parts.

Die nuts, also known as rethreading dies, are dies made for cleaning up damaged threads,[9] have no split for resizing and are made from a hexagonal bar so that a wrench or shifter spanner can be used to turn them. Die nuts cannot be used to cut new threads.[10]

The use of a suitable lubricant is essential with most tapping and reaming operations. Recommended lubricants for some common materials are as follows:

In power tapping and reaming operations, the tool and workpiece should be continuously flooded with lubricant.

This information originally retrieved from http://en.wikipedia.org/wiki/Tap_and_die
on Wednesday 26th October 2011 11:11 am EDT
Now edited and maintained by ManufacturingET.org