A  or triangle is an object used in engineering and technical drawing, with the aim of providing a straightedge at a right angle or other particular planar angle to a baseline.

The most simple form of triangle is a triangular piece of transparent plastic (or formerly of polished wood) with the center removed.   The outer edges are typically bevelled. These set squares come in two usual forms, both right triangles: one with 90-45-45 degree angles, the other with 30-60-90 degree angles. Combining the two forms by placing the hypotenuses together will also yield 15° and 75° angles (see below). They are often purchased in packs with protractors and compasses. 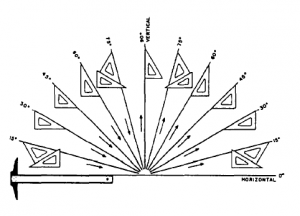 Triangles Being Used in Combination

Less commonly found is the adjustable set square. Here, the body of the object is cut in half and rejoined with a hinge marked with angles. Adjustment to the marked angle will produce any desired angle up to a maximum of 180Â°.